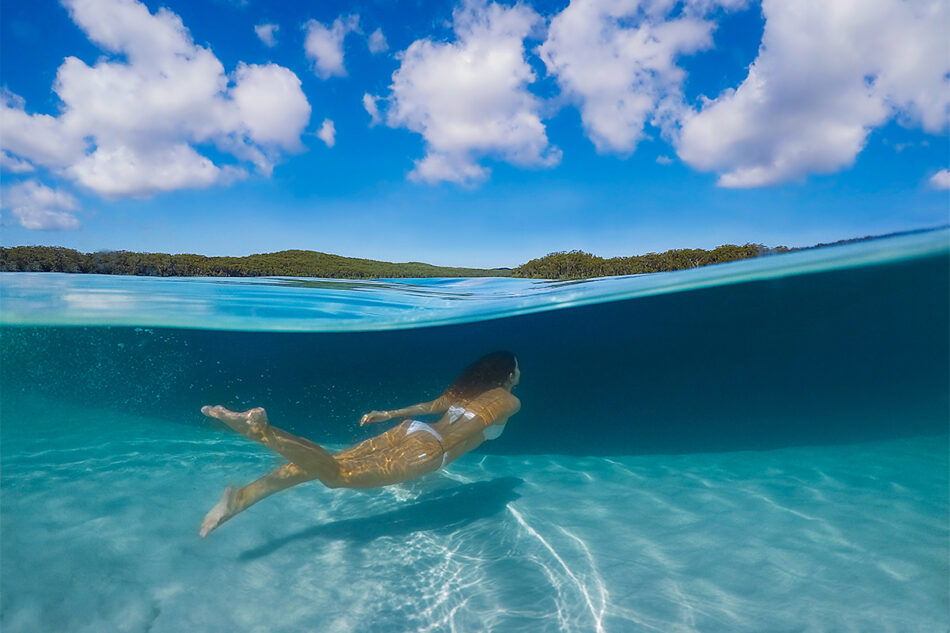 Soon after arriving on K’gari (Fraser Island), we learn that speed and momentum are the first principles of driving on sand.

“When I first started, my colleagues said, ‘Just drive it like you stole it’,” says Martin Goldsbury, our driver and guide for the day.

“At times it may seem like we’re going a little bit fast, but if I see a soft patch of sand, I’m going to hold my foot down to get through (it).”

We’ve just left Kingfisher Bay Resort on a Fraser Explorer Tours’ four-wheel drive bus and are shuddering along a former logging trail towards the island’s east coast, riding the crests and valleys of the sand road as though they’re waves.

Located just off the Queensland coast near the jumping off point of Hervey Bay, 122-kilometre long K’gari is the world’s largest sand island.

A popular camping and hiking destination, it is billed as an untamed wilderness – so vast and rugged that a hiker who became separated from her group in September wasn’t found for three nights.

At the time we visited, towards the tail end of 2020, K’gari had just reopened after seven weeks of bushfires razed 85,000 hectares (about half) of the island.

It was a fraught time for Kingfisher Bay Resort’s general manager David Hay, as the fire skirted the edge of the property. Guests and most staff were evacuated, while 60 firefighters moved in.

The blaze started after embers from an illegal campfire ignited nearby vegetation. Four men charged with unlawfully lighting a fire subsequently pleaded guilty in court.

Despite the scale of the fires, no lives were lost, the 90-kilometre Great Walk remains accessible, and the only property damage was a scorched picnic table at Happy Valley.

However, many on the island remain concerned about potential losses that are yet to be counted through impacts on the flora and fauna, and I’m curious to see the aftermath for myself.

The bus stops to avoid running over a carpet python which is crossing the road. Some members of the group pile out to take selfies with the snake, before we set off again.

The surrounding vegetation tumbles past – a tangle of more than 850* different plant species and 147 families of flowering plants and ferns.

According to the United Nations Educational, Scientific and Cultural Organization (UNESCO), which conferred the island’s World Heritage status in 1992, it is the only place on the planet where towering rainforest, improbably, grows on sand.

We burst out of the bush at the small town of Eurong and plough down to 75 Mile Beach, a rugged stretch of sand overlooking the Coral Sea.

Officially designated as a main road, where all the usual Queensland road rules apply, it’s plied by dozens of four-wheel drives heading north and south.

Our first stop is Eli Creek, a large, flowing freshwater creek which pours about 4.2 million litres of water into the ocean ever hour.

“If you were to put an Olympic sized swimming pool here it’d fill up in just 23 minutes,” says Goldsbury.

We wander along a fern-fringe boardwalk, to a set of steps from which people launch themselves into the water, usually atop an inflatable swim ring, using the momentum of the creek to float all the way back to the beach.

After I towel off, a dingo which has been moseying around the creek gambols towards me.

According to the Queensland Parks and Wildlife Service, around 200 of these animals roam the island. To maintain their wildness, and limit their dangerousness, visitors are prohibited from feeding or otherwise interacting with dingoes.

I lift myself to my full height and look the dingo in the eye. She loses interest and saunters off.

Flames have licked the surrounding bushland, but the towering cliffs comprised of sand and clay, and sculpted by aeons of wind and water, stand unaffected.

Other sites visited on this ‘Beauty Spots’ tour include the former logging hub known as Central Station and the Insta-worthy Lake McKenzie, where pure white silica sands contrast with aquamarine waters.

The next morning, we linger over breakfast, before heading down to the jetty and onto the beach.

There, we pick our way across the wet sand until we reach the mouth of Dundonga Creek, a nutrient-rich nursery for young fish and crabs.

We head up the hill towards a lookout. There are some singed tree trunks on the path, but most of the area is lush and green. We pause to enjoy views out over the Great Sandy Straits.

In the air, we see brahminy kites and white bellied sea eagles; in the ocean, dugongs and turtles; and on the wet sands of Pelican Bank, a small sand cay surrounded by deep water channels, we watch miniscule armies of soldier crabs patrolling the sands.

As the sun sets, we settle in for sundowners at the Sunset Bar, before moving onto nearby The Sand Bar, where a bucket of prawns and a couple of beers are the perfect toast to a long weekend.

This story appeared in RACQ’s The Road Ahead magazine in April/May 2021. Download a pdf of K’gari after the fires.