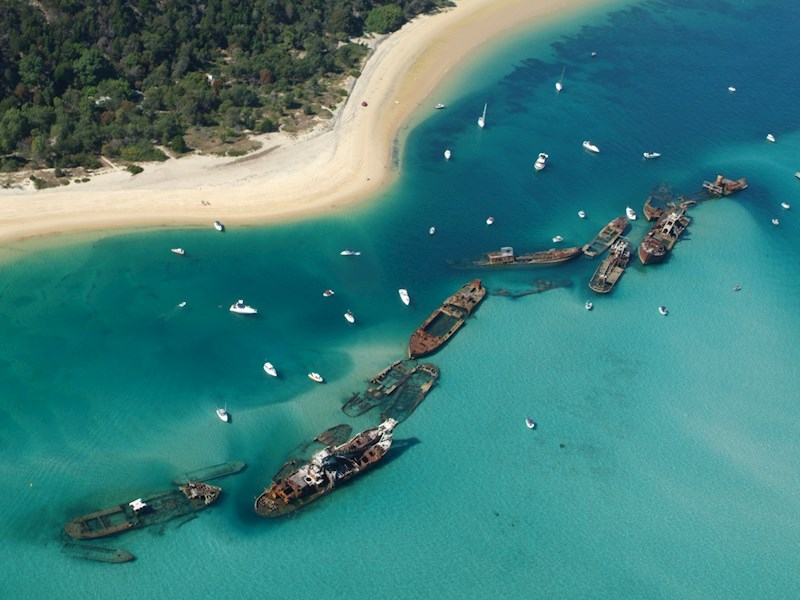 For an idyllic escape to an island paradise, look no further than Queensland’s Moreton Bay.

The sand islands of Moreton Bay off the coast of Brisbane were made for sun-drenched barefoot breaks. Sculpted by the forces of wind and water, they form a buffer between Australia’s east coast and the open sea.

For some of the islands, the omnipresent natural beauty is offset by a somewhat brutal past. Moreton Island, for instance, was a whaling station, Peel Island a leper colony and St Helena Island was a maximum-security men’s prison for more than six decades. Fortunately, paradise has since been restored.

Isolation, or at least the illusion of it, enhances the appeal, for even the biggest islands are sparsely populated and, unless you have your own boat, most of the Moreton Bay islands are accessible only by passenger ferry or seaplane.

North Stradbroke Island, the second largest sand island in the world (pipped only by Fraser Island further north), is 40 minutes by vehicular ferry from Cleveland, which is about 30 km from the Brisbane CBD. Four-wheel-drives crowd the gateway town of Dunwich every day.

Drive inland on sand roads, past stands of banksia, grass trees and statuesque scribbly gums to Brown Lake, a popular swimming hole coloured by the surrounding native tea-trees. Enjoy a picnic or barbecue before taking one of Straddie’s few sealed roads up to the village of Point Lookout to explore the North and South Gorge walking tracks. The pandanus-framed rocks and boardwalks offer some of the best vantage points for watching humpback whales during their annual June-to-October migration and, at other times of the year, dolphins, manta rays and turtles are often sighted. To the south, the long stretches of unspoiled beach are frequented by fishermen.

Eat at Point Lookout Bait and Seafood. Seafood is a huge part of the North Stradbroke Island experience, so it’s worth popping in here for fresh prawns, oysters, crabs, fish and bugs. For a sweet treat, visit Oceanic Gelati and Coffee Bar. Decorated with mermaid murals and hibiscus flowers, this is a fitting place to pause. Sample one of the ice confections in flavours including ginger, cinnamon and roasted almond. Then survey the waves or watch for whales as the red-and-yellow shuttle buses trundle by.

Situated at the northern end of the glamorous Gold Coast strip, but quite apart from it, the much smaller South Stradbroke Island appears on most maps as little more than a footnote.

It was joined to North Stradbroke Island until 1896, when a shipwreck, explosion and subsequent salvage operation weakened a stretch of dunes, allowing the sea to flow through. Since then, South Stradbroke has evolved a relaxed vibe all its own.

Most of the island is undeveloped, with the Couran Cove Island resort being the main attraction. Take a 2km walk along Tipplers Road to the north-western side of the island, where there’s a cluster of campsite and a stretch of sand littered with crushed oyster shells, cockles and periwinkles. A little further north along the beach is the Verandah Bar, perfect for a casual meal.

Parasailors floating above the palm-fringed sands of Moreton Island, the world’s third largest sand island, say it’s one of the best ways to appreciate how much of the island remains untouched. Around 98 per cent of the island is a national park and, accordingly, this windswept wilderness supports a profusion of wildlife, from noisy whistling kites that whirl at dusk, through to the wild bottlenose dolphins that clamour for fish at the Tangalooma jetty each night.

Stay at Tangalooma Island Resort, which offers comfort and convenience for those who choose not to go camping on the island. Tangalooma offers a range of accommodation to suit all budgets, including hotel rooms, retro motel-style resort accommodation, beach villas and the exclusive, luxurious Deep Blue apartments. Indulge your adventurous streak with tours and activities, such as quad-bike riding on tailor-made trails, sand tobogganing down the steep slopes of The Desert dunes, and snorkelling and diving at the reefs offshore. While whale-watching boats venture out only from June to October, the resort’s Marine Eco Cruise operates throughout the year and offers excellent odds of spotting green or loggerhead turtles, stingrays and endangered dugongs. Marine biologists estimate that up to 1000 dugongs live in Moreton Bay year-round.

The northernmost Moreton Bay island, and the only one connected to the mainland by a bridge, Bribie Island is also the most populated. Don’t be deterred by the sight of shopping mall developments – there are still some hidden treasures on this island. Stay at On the Beach Resort which adds an upmarket note to the caravan parks and simple beach shacks that have traditionally reigned on Bribie Island. Here, modern three-level villa penthouses come equipped with rooftop decks, open-air spas and private entertaining areas. There are also two-bedroom tower apartments and three-bedroom beachfront apartments with secure courtyards. Early risers can enjoy the spectacular sunrise across Moreton Bay. Eat at The Surf Club which overlooks the dunes leading down to a patrolled beach. With its carafes of wine and counter lunch menu featuring such dishes as grilled salmon and rice with lime and coriander dressing, this club has a delightfully retro feel.

This is a condensed version of a story which appeared in Qantas inflight magazine The Australian Way (now Qantas Magazine) in October 2007.